Newly released bodycam videos reveal that moments after being fatally shot by an Orange County deputy one of the cops refers to the dying man as a “bold nigger.”

The deputy who uttered the racist expression was part of a team that was serving a warrant on a man that was part of a group leaving the Florida Mall on Aug. 7. 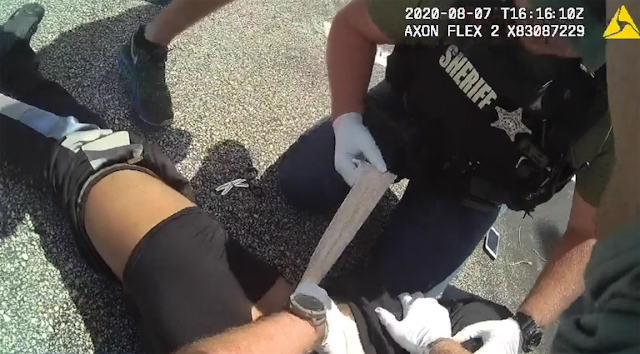 The man who was fatally shot was not the target of the warrant.

Apparently frightened by the jump-out team of deputies Salaythis Melvin, 22, fled when a deputy opened fire and shot him in the back.

Following Sheriff’s Office protocols, the plainclothes deputies at the scene started administering first aid to Mr. Melvin, who was moaning and unconscious. That’s when one of the deputies uttered: “You’re a bold nigger man.” Click here to see and hear the racist clip.

Mr. Melvin wasn’t wanted for anything, though deputies later claimed that he was armed. No firearm was evident when deputies rolled him over to offer first aid. One of the deputies who was administering first aid admitted Mr. Melvin had been shot in the back.

Police are only supposed to fire when confronted with deadly force. A man running away from cops in a parking lot doesn’t pose a threat to deputies.

The video was released on Tuesday Election Day, too late to impact the re-election of Sheriff John Mina.