Setting record straight on man found hanging in the park

News that a black man was found hanging from a tree in Orlando is alarming to most black people in America given this nation’s ugly history of racist lynchings, which is why we reported this story.

A report like that can grow and become more frightening as time passes, which is what happened in the case of Nevan Baker, 22. 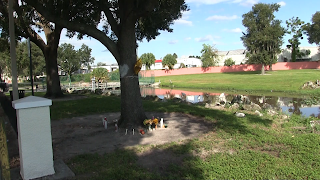 On Oct. 5th 32805OrlNews and Orlando Urban News published a video interview with one of Mr. Baker’s relatives who spoke to us with the blessing of Mr. Baker’s mother.

The relative insisted there was no way Mr. Baker would kill himself. That relative also told us that when Mr. Baker’s body was found there were signs that he had been beaten, there were injuries to his face and a tooth was missing.

The grief-stricken family disputed the police conclusion that Mr. Baker killed himself. Black people have good reasons not to trust the police because of false and misleading information law enforcement have presented in other instances. We also questioned the investigative procedures police used to arrive at the conclusion that Mr. Baker killed himself.

In addition, there were reports on social media that not only was Mr. Baker beaten, but he was found with his hands tied. We never reported that his hands were tied, but many others did.

Since then we have compelling information about this case. We have an obligation to share that information with our audience. Here it is:

·        There are no signs of injury on Mr. Baker’s face or body, contrary to what the relative told us in the video interview that we published. If he had been beaten those injuries would be apparent after his death. We don’t know if there was a missing tooth, but a loose tooth could have popped out at the time of his death.

·        There was no hangman’s noose. It appears the nylon line was tied in a simple slipknot.

·        Body cam video shows that the police officers who found Mr. Baker hanging from the tree acted quickly and professionally to cut him down and try to revive him.  Those officers should be commended. That reality is contrary to some of the social media chatter.

·        There’s no evidence that any hate group had a hand in Mr. Baker’s death, despite some of the social media speculation, according to a trusted source that monitors hate group social media.

·        Information has been uncovered that Mr. Baker may have tried to harm himself in the past.

So what happened to Mr. Baker?

Whatever happened is a tragedy. A loved son and brother is gone too soon. Mr. Baker never reached his potential. We should all mourn that loss.

In journalism we always strive to get right. But sometimes we miss, or could have done better. When that happens, we have an obligation to set the record straight.