What other reason would there be for leaving Parramore out of the DTO Go Public Bathroom Pilot Program? 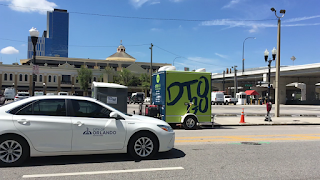 The bathroom program is a product of the city’s Community Redevelopment Agency to improve life in Orlando’s urban core.

The demographics of Parramore -- a historically black, struggling community -- were used to create the CRA, which is roughly bounded by Westmoreland Drive, Colonial Drive, Gore Street, and Summerlin Avenue.

Yet since late last year when this portable bathroom project was launched it has not been stationed in the Parramore community.

It is mainly located and operated to serve the mostly white patrons of downtown’s nightclub and restaurant district east of Interstate 4.

A city fact sheet on the bathroom project explained: “There is an increasing need to provide public restrooms in the downtown core.”

Asked why Parramore was excluded, even though the community played a pivotal role in the establishment of the CRA, a city spokeswoman responded: “Locations were selected based on feedback from downtown stakeholders, the downtown Clean Team’s general findings on incidents of public human waste, the downtown ambassadors’ general findings of human protein and discussions with an internal Exploratory Committee.”

Most people who live in Parramore have a bathroom in their house. However, Parramore has a large population of homeless people and others who don’t have access to a restroom during the day. The quality of life in the community would benefit from inclusion in the bathroom project.

Excluding Parramore from this program is another example of the city’s racially discriminatory policies and practices that shortchange Parramore where residents are being driven out of the community by gentrification.