The owners of a Winter Garden apparently think slavery was fun. Why else would they name their business “MoonCricket Grille”? 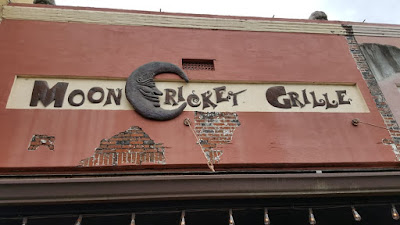 A quick Google search shows that Moon Cricket is a highly derogatory name referring to the slaves singing like crickets at night after a long day working in the fields.

The restaurant’s website explains the business’s name this way: “We wanted a name that was catchy, whimsical and unique, and conveying the message of being a fun inviting place to enjoy great food and entertainment.  After months of brainstorming came up with the name ‘The MoonCricket Grille.’  That was it, a fun hoppin' place.  In that same happy whimsical spirit, designed a fun corporate logo with a big smiling Crescent MOON and a CRICKET jumping off the smiling moon's head.”

Joshua Eaton said the name is not whimsical. It’s racist.

Eaton, who is white, started a petition to change the name. On the petition he wrote: “I want to start off by saying Moon Cricket Grille is a great local spot in Winter Garden. Great food, great and friendly staff and a great beer selection. There’s just one problem, the name. I did a little research where they got the name and their site said the just wanted something fun and catchy. I thought cool, but what is a moon cricket, so I googled it. I wasn’t exactly sure what to think once I did that. Moon Cricket is a racial slur used by slave owners to describe slaves that would come out at night and sing slave songs. I don’t want to see anything happen to this bar like what’s been going on currently in our cities, but learning what a moon cricket was I can’t say I’m comfortable with the name or going back there till it’s changed, and I’d like to see some change. This is casual racism, something people have been fighting to end, and changing the name of this place will be a step in the right direction.”

The petition, which is being sent to Winter Garden leaders, has been signed by more than 2,000 people. You can sign by clicking here.

How does the restaurant respond?

Eaton received a text message from the restaurant that reads in part: “I ask every one offended by our name: Are you truly offended by an obscure whimsical made-up name or being guided by a few malicious troublemakers who get their kicks by causing social unrest instead of civility.”

In the wake of George Floyd’s murder, activists throughout the nation have been demanding the removal of Confederate statues and other racist symbols.

West Orange County has a sinister history of racism that includes the 1920 Ocoee Massacre resulting in the deaths of hundreds of black people and the lynching of July Perry.

You decide, is MoonCricket a racist name?

The petition can be found here.