Thursday night the Sheriff’s Office published a statement telling the public that their ears were playing tricks and they did not really hear a racist comment uttered by a plainclothes deputy involved in shooting Salaythis Melvin in the back outside Florida Mall on Aug. 7. 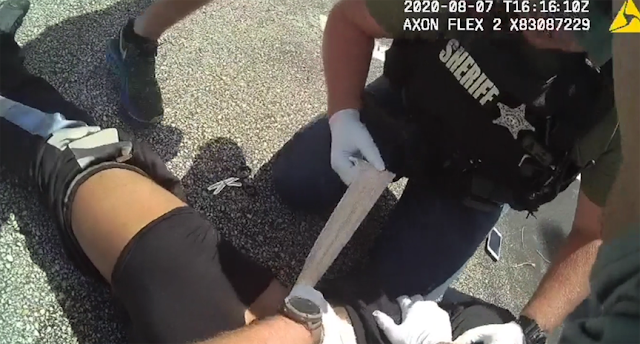 The racist comment was heard while deputies were administering first aid to Mr. Melvin, 22, who was mortally wounded by a jump-out team that was serving an arrest warrant on one of Mr. Melvin’s companions.

Mr. Melvin was black. Based on what can be seen on the body cam videos, all the deputies on the jump-out team were white males.

Hundreds of people who listened to audio on a body cam video released earlier this week agreed one of the deputies uttered: “You’re a bold nigger.”

In the written statement released Thursday night through Twitter, the sheriff’s office said after extensive audio analysis, they concluded that the deputy said: “Is there a blow thing, or no.” The statement said the deputy was referring to a face shield used for CPR.

What do you think? Does “Is there a blow thing or no” sound remotely like “You’re a bold nigger”?

You can review the body cam video by clicking here.

This explanation is almost as far-fetched as one given by law enforcement officials after a team of Orange County jump-out deputies shot James Bauduy to death 2 years ago in front of a crowd of bystanders on South Street in Parramore.

Orange County Mayor Jerry Demings, who was Orange County sheriff at that time, said deputies fired because Mr. Bauduy made a “furtive” hand movement that caused them to think he was about to pull a gun.

The sheriff’s office refused to say whether a gun was found at the scene. (For more on that case, click here)

After weeks of stalling the Florida Department of Law Enforcement announced that Mr. Bauduy did not have a gun, but that he was holding a 9 mm handgun magazine in his hand. A handgun magazine, sometimes referred to as a clip, holds bullets for a pistol, but it can’t fire bullets.

Why someone being chased by deputies would pull a useless magazine is as difficult to understand as how anyone would mistake “You’re a bold nigger” for “Is there a blow thing, or no.”